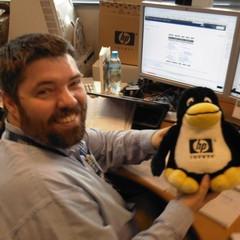 Bruno Cornec Back to Speakers Bureau

Our Solution Center is working on Open Stack demos and integration with other HPE products.

Bruno Cornec is Engineer of the French Ecole Centrale de Lyon. (1987)
He has been managing various Unix systems since 1987 and Linux since 1993 (0.99pl14).
Bruno first worked 8 years around Software Engineering and Configuration Management Systems (Build systems, Quality tools) in Unix environments.
Since 1995, he is Open Source and Linux (OSL) Technology Strategist and Evangelist, initially for an HPE reseller and since 2000 for Hewlett Packard Enterprise directly in the EMEA Customer Innovation Center.

He is a member of the Solution Linux/OWF/POSS Conference Board since 2006.
He is also a board member of the AFUL and OpenStack-fr associations.

Outside computers, Bruno also likes early and baroque music, singing and playing the recorder. He's married and father of 3 kids.